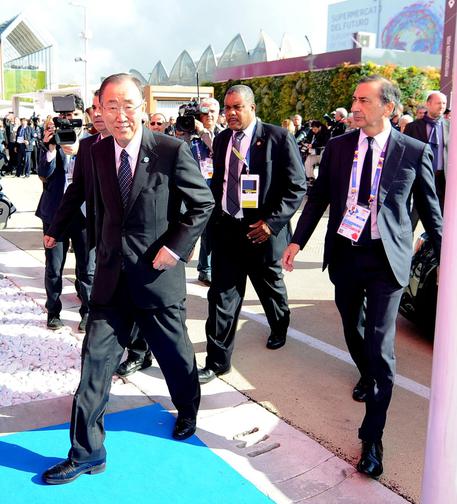 (ANSA) - Rome, October 16 - Milan Expo 2015 on Friday is celebrating World Food Day, a global commitment to eradicate hunger on the anniversary of the creation of the Food and Agriculture Organization of the United Nations (FAO) on October 16,1945.
UN Secretary General Ban ki-moon will be visiting the food-themed world's fair, which has topped the 20 million visitors' mark exactly two weeks before it wraps up on October 31, organizers said.
During the official visit Friday he will be presented with the Milan Charter, a global food practices initiative that represents Expo's legacy.
The UN secretary general will be joined by Italian President Sergio Mattarella, among others, for the opening ceremony of Expo's celebration of World Food Day.
The official ceremony will commemorate FAO's 70th anniversary and address the issue at the center of World Food Day this year - 'Social protection and agriculture: breaking the cycle of rural poverty' - and its link with the UN theme for the Universal Exposition which focuses on the zero hunger challenge.
Events planned Friday to mark World Food Day include "Zero Hunger Generation", a question and answer session on the key role that new generations will play in achieving the new Sustainable Development Goals (SDGs) and "Finance for Food", organized by the economy ministry and the International Fund for Agriculture Development (IFAD).
And this year's World Food Day will be focusing in particular on family farming.
According to FAO, more than 90% of the 570 million farms worldwide are managed by an individual or family.
These small producers have a key role in the economic and social development of large rural areas but need help to create a network in order to have more of an impact on the political and economic choices affecting them. Meanwhile, Expo on Thursday organized events focusing on the work carried out by anti-poverty charity Oxfam, a civil society participant in the world's fair that has been working for years on the campaign #challengehunger.
The appeal is aimed at defining a concrete action plan to eradicate hunger by 2030.
"There are 795 million people suffering hunger in the world, a number that is 13 times higher than the Italian population", said Roberto Barbieri, the director general of Oxfam Italy.
Oxfam's initiative in particular focused on female empowerment and women's role in farming Barbieri noted that women can play a key role in the fight against hunger.
"If men and women had equal opportunities worldwide, there would be 150 million less people suffering hunger", noted Barbieri.
And another key issue in combating hunger at the center of the world's fair is food waste.
According to FAO, over one-third of food produced every year for human consumption - approximately 1.3 billion tons - is wasted.