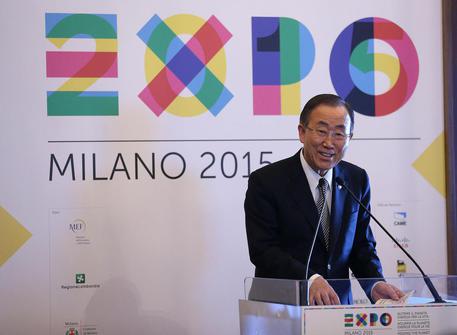 (ANSA) - Milan, October 16 - United Nations Secretary-General Ban Ki-moon made his first stop on a tour of the Expo world's fair on Friday with a visit to Pavilion Zero, where students applauded him and called for a speech.
Ki-moon was greeted by Expo Commissioner and CEO Giuseppe Sala and General Commissioner Bruno Pasquino, who accompanied him to Pavilion Zero along with Foreign Minister Paolo Gentiloni, Turin Mayor Piero Fassino and FAO Director-General Josè Graziano Da Silva.
Prior to the tour of Pavilion Zero led by Sala, Ban stopped to have some photos taken in front of a UN blue spoon installation, the organisation's symbol at Expo representing its Zero Hunger Challenge campaign.

President Sergio Mattarella was also on hand. In a speech to celeberate the Food and Agriculture Organization (FAO) of the United Nations World Food Day, he said asylum seekers who land on Italy's coasts have a right to their dignity.
"They abandoned their homes and loved ones to escape persecution, famine and hunger - women and men who have a right to the safeguarding of their dignity". Almost 310,000 asylum seekers have reached Italy since 2014, he added. "Feeding the planet is inseparable from the word 'peace," Mattarella said, illustrating the Milan Charter to visiting UN Secretary-General Ban Ki-moon.
"We give you the Milan Charter, which is the legacy of Expo," he told Ban.
"This is the fruit of a collective labor...signed by over a million people," Mattarella said.
The Charter is an expression of global citizenship, as hunger can only be ended by global action, the president said.
The Milan Charter was drafted to commit individuals, associations and companies that sign it to take responsibility through their actions and policies, while requesting governments and international institutions to implement rules and policies that ensure a fairer and more sustainable future for the planet.

Also on Friday, Pope Francis said in a message to the FAO on World Hunger Da  that freeing humanity from hunger is a "goal that cannot be put off...(and) must be pursued with a renewed will in a world where the gap is growing in levels of prosperity, income, consumption,  access to health care, education, and life expectancy".