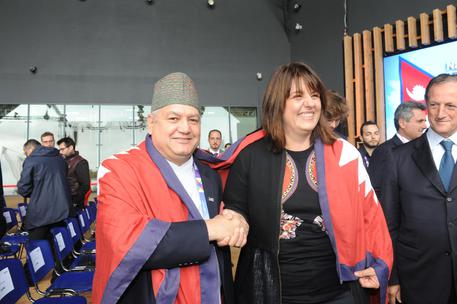 (ANSA) - Milan, September 23 - The Nepali trade minister spoke at Milan Expo 2015 on Wednesday during the inauguration of the world fair's National Day of Nepal. "I sincerely thank (Premier) Matteo Renzi, the government and the Italian people for the commitment and solidarity they have shown after the earthquake that struck Nepal," said Sunil Bahadur Thapa.
He added that continued support shown during Expo represents a "milestone in the history of relations between Nepal and Italy, which after Expo will be even stronger. " Italian undersecretary for environmental ministry, Barbara Degani, participated in the ceremony, as did Expo General Commissioner Bruno Pasquino.
Bahadur Thapa said food security in Nepal - the country's point of strength - was under pressure from neighboring countries. Degani responded that the Italian government wishes to continue supporting economic recovery in Nepal said 1.4 million euros worth of humanitarian aid was on its way to address the disaster left by the earthquake last April. The earthquake on April 25 killed more than 9,000 people and injured more than 23,000.