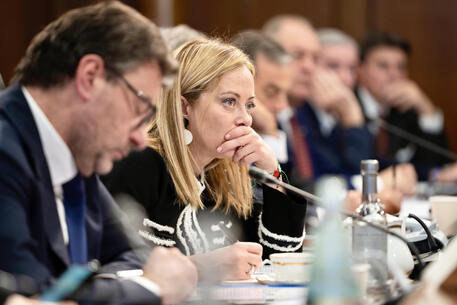 (ANSA) - ROME, NOV 30 - The government's 2023 budget bill will hit the floor of the Lower House on December 20, House whips decided Wednesday.
The 35-billion-euro package, which includes 21 billion euro of measures to cushion the impact of the energy crisis, must be approved before the end of the year.
A windfall tax on the extraordinary profits of energy companies has been increased to 50% of the profits of 2022 in excess of the average fort the 2018-21 period.
This regards around 7,000 companies involved in the production, sale or importation of energy and should generate around 2.56 billion euros in revenue.
The package cuts income tax for people earning up to 35,000 euros by two percentage points and for those on under 20,000 by three points.
It raises the maximum threshold of the 15% flat tax for the self-employed for those on up to 65,000 euros a year to 85,000.
The citizenship-wage minimum-income benefit is set to be abolished for people considered fit for work at the end of next year.
The bill also makes it easier for people to retire early.
It brings in the 'Quota 103' system which makes it possible for people to start claiming their State pension at the age of 62 if they have 41 years of social-security contributions.
Premier Giorgia Meloni has said the 2023 budget bill was consistent with the commitments her government had made to the Italian people.
Writing on Facebook, she said "In little more than a month since its formation, the government has already shown all its unity and concreteness, giving serious and detailed answers to the needs of citizens and Italy.
"(It is) a budget written and presented in record time, consistent with the commitments made to the Italian people, with large resources earmarked for families, businesses and the most fragile and struggling categories".
A row has broken out over a measure in the government's 2023 budget bill that raises the minimum amount for which retailers are obliged to accept electronic payments from 30 to 60 euros, with opposition parties and consumer groups blasting the move.
The centre-left Democratic (PD) said it would encourage the use of cash and thus hamper the fight against tax evasion, breaching the commitments made to the EU for the National Recovery and Resilience Plan (NRRP) in the process.
"It goes against the interest of millions of Italian people who use electronic money every day and it is in contrast with the NRRP," said the PD's economic pointman Antonio Misiani.
The National Union of Consumers (UNC) said it would ask the European Commission to intervene.
"The government is making us go back to the Middle Ages, taking sides against consumers and the needs of families," said UNC President Massimiliano Dona.
"They think that they are protecting shopkeepers in this way but, not realising that they are going against what is normal all over Europe, they are actually going against the interests of retailers, who have many advantages from electronic payments".
European Commission spokesperson Veerle Nuyts said the EU executive had not yet assessed the move as the budget is not in its definitive version. (ANSA).