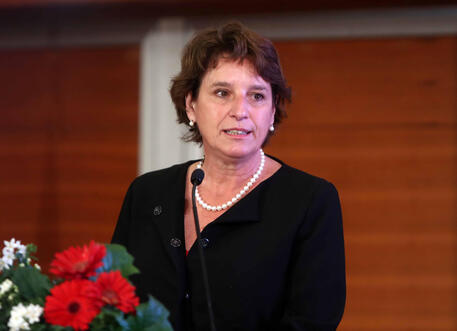 (ANSA) - ROME, MAY 18 - Education, University and Research Minister Cristina Messa told ANSA "it's their loss" Wednesday when asked about the UK's list of universities whose students will get new work visas and which does not feature any Italian institute of higher learning.
She said the government would try to get Britain to revise the list, which comes into effect on May 30, on the basis of "more current indicators" but that it was London's loss if it was missing out on highly skilled Italian graduates.
"It's a system that Britain obviously as a sovereign state can choose to implement, but we as a government can ask (them) to revise the university rankings based on more up-to-date indicators, and reiterate that they are losing a big slice of good graduates, who would provide as many high skills...it's their loss".
Foreigners can only enter post-Brexit Britain with a job offer and having met a set of other standards and requirements.
American universities top the list which features only five European universities: the polytechnics of Lausanne and Zurich, Sweden's Karolinska Institute, Munich's Ludwig Maximilian University, and the Université Sciences et Lettres in Paris.
The doors are also open for the universities of Hong Kong and Beijing, Japan's Kyoto University and two universities in Singapore. (ANSA).