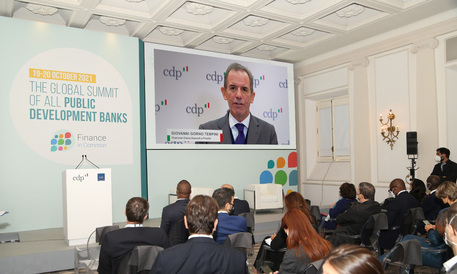 (ANSA) - ROME, OCT 20 - (by Simona D'Alessio and Angelica Folonari) The Finance in Common Summit (FICS), hosted this year in Rome by Italian public investment bank Cassa Depositi e Prestiti (CDP), in partnership with the UN's International Fund for Agricultural Development (IFAD), ended with the encouraging prospect of an ever 'greener' future for our planet, grappling with the damage caused by pollution and climate change, thanks to the efforts of the Public Development Banks (PDBs) who are "boosting their resources" in the sector, "as is shown by the one trillion dollars of investments in 'green' projects by the 26 PDBs that are part of the International Development Finance Club (IDFC), as well as pledges for further funding by 2025".
On the second and last day of the summit, it was announced that the FICS "will present in 2022 a report on the progress of its activities to the G20 duty president, testifying to the crucial role played by the global PDBs which are protagonists, at an aggregate level, of over two trillion dollars of investments, around 10% of total global investments, acting as a link between public policies and the private sector".
Boosting 'green' initiatives, aimed at the fairest possible growth, there will be an ad hoc platform, set up with the intention of succeeding in accelerating more inclusive financial operations in the field of agriculture and in the activities of transformation, packaging and transport of food.
"We are all too aware," said European Economic Affairs Commissioner Paolo Gentiloni in a video message, "that the investments needed to achieve the 'green' transition are so big that public funding alone won't be enough." Private finance would be crucial, he specified, while Economy Minister Daniele Franco said "the whole community of Public Development Banks must be part of the collective effort towards better and more resilient development".
In his speech to the concluding session of the summit, CDP CEO Dario Scannapieco, finally, stressed that public banks "can be strategic allies in directing public and private investment towards sustainability in an innovative way". (ANSA).