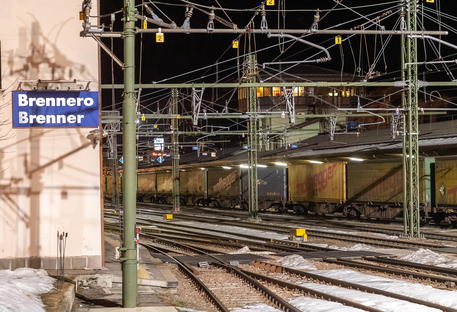 (ANSA) - BRUSSELS, OCT 12 - Getting the transport of goods and passengers to switch from road to rail, which causes less pollution, has been a priority of sector policy for decades in many European countries.
These include Italy, which has devoted 25 billion euros of its PNNR funding to the development of high-speed rail lines with the aim of doubling traffic on them.
And yet most of the efforts carried out so far for a modal shift from road to rail have not been very effective, wrote Helmut Adelsberger, a engineer and the CEO of InfraConsultA, in the latest edition of TerritoriALL, the magazine published by ESPON, a research programme specialised in EU regional studies.
Indeed, rail has even lost market shares in recent years, despite major infrastructure investments and significant logistical improvements.
The expert examined the case of the Munich-Innsbruck-Verona Brenner Corridor, the central section of the Scandinavian-Mediterranean Core Network Corridor.
This section boasts the highest levels of road and overall transport flows across the Alps.
In 2019, only 27 % of the goods were transported via rail, compared to the 73% carried by more than 2.5 million trucks.
Adelsberger wrote that the building of the Brenner Base Tunnel, which is expected to open around 2030, will not shift transport flows to rail by itself.
The infraðstructure will only become fully effective if accompanied by a set of measures to remove the technical and bureaucratic obstacles impairing rail freight transport, including at a large scale.
The 'Brenner without Borders' pilot project, launched by the MEP Barbara Thaler and approved in autumn 2020, aims to overcome these obstacles to make rail transport easier, faster and more reliable.
The project features a phase, which will start soon, in which freight trains will try to run from Munich to Verona and vice-versa without stopping at the Brenner Pass, thanks to cooperation between the European Commission and the managers of the rail infrastructure of Italy, Germany and Austria.
The evaluation that will take place in autumn 2022 will show how rail transport can assert itself against road transport, under improved conditions in terms of time and costs.
Adelsberger, stressed that, beyond the measures of the pilot project, EU-wide harmonisation of technical standards and legal provisions should be envisaged to enable rail to achieve a much higher share of the EU transport market.
There would be many advantages, going from a more efficient exploitation of the Brenner Base Tunnel to a reduction in CO2 emissions and enhanced road traffic safety. (ANSA).