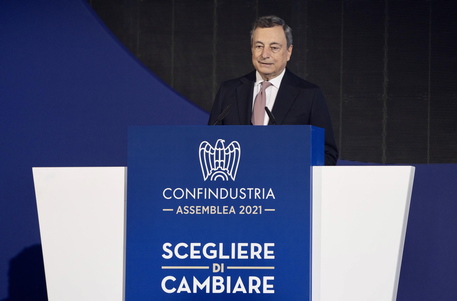 (ANSA) - ROME, SEP 23 - Premier Mario Draghi on Thursday launched an economic and social pact to boost the post-COVID economy and create jobs.
Speaking for the first time to the annual assembly of the industrial employers' federation Confindustria, Draghi also said the government will not raise taxes.
The government estimates that Italian growth will be around 6% this year, Draghi said.
This is up from a 4.5% growth forecast issued in the spring, he said.
"The government forecasts that we will present in the coming days estimates for growth at around 6% this tear, compared with the 4.5% hypothesized in the spring," Draghi said.
Draghi also said the major challenge facing the government was to achieve "lasting" post-COVID growth.
In order to stoke the recovery, he said, fresh contagion and lockdowns must be averted at all costs.
He said that if the spread of the virus was brought under control, "we will ease the remaining restrictions".
Draghi said the government was "close" to its target of getting 80% of Italians fully vaccinated by the end of September.
He said the Green Pass vaccine passport which has recently been enforced in all workplaces across Italy starting in mid-October was an "instrument of freedom and safety".
Confindustria chief Carlo Bonomi voiced the hope that Draghi would continue leading the government for a long time.
Draghi urged Confindustria to "do more" for the economy, saying "no one can ignore the call".
He said "let's all sit down together for an economic and social pact".
Draghi also said that: a competition law would be launched in October to stop a defence of rent-seeking; and that the government will earmark over three billion euros to ease gas and electricity burdens, which have risen recently.
The premier also said the government needed unity so as "not add uncertainty" to the political and economic picture. Earlier Confindustria chief Bonomi paid tribute to Draghi's "sterling" work as premier, said the government must focus on the recovery and not on anti-vax rows, and reiterated opposition to lifting a block on dismissals.
Democratic Party (PD) leader Enrico Letta hailed Draghi's proposal for an economic and social pact while League leader Matteo Salvini hailed his promise not to raise taxes. Standard & Poor's on Thursday also raised its Italy 2021 growth forecast to 6%, from 4.9%. (ANSA).