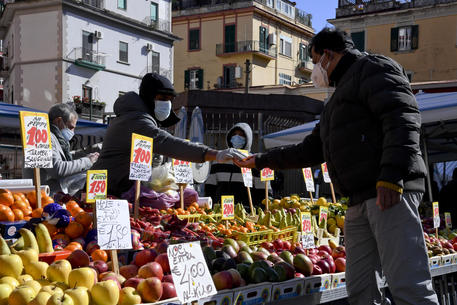 (ANSA) - ROME, APR 15 - Italy's GDP will rise by a projected 4.5% this year, according to the DEF economic and financial blueprint approved by the government, premier's office sources said Thursday.
This will be followed by 4.8% growth in 2022, 2.6% in 2023 and 1.8% in 2024, the DEF says, "unprecedented levels of growth in the last decade".
But if vaccines show only limited effectiveness, then growth this year will be just 2.7% this year and 2.6% next, the DEF said.
The DEF will also include a 40 billion euro budget adjustment, the latest to fund COVID relief and boost firms, including 30 billion for investments.
The 40 billion variation, coupled with a previous 32 billion adjustment, will push the budget deficit out to 11.8% of GDP this year, premier's office source said after the approval of the document, stressing that this "very high level is due to the measures of support for the economy and the fall in GDP".
The deficit will then fall to 5.9% in 2022, 4.3% in 2023 and 3.4% in 2024, while the deficit will start heading back below 3% from 2025 on, the premier's office sources said.
The public debt, meanwhile, will rise to 159.8% of GDP, to fall to 156.3% in 2022, 155% in 2023 and 152.7% in 2024, premier's office sources said after the cabinet meeting that OK'd the DEF.
Italy's economy is set to rebound this year from an unprecedented peacetime recession last year due to COVID-19.
Economy Minister Daniele Franco said the new measures would be mainly aimed at the self-employed and businesses and "will focus resources on boosting the resilience of the companies most highly impacted by the closures, as well as on credit availability and capitalization".
He said "interventions will be swift".
Franco said the National Recovery and Resilience Plan (PNRR) would amount to some 237 billion euros and would give an "unprecedented shock" to boost the economy.
Franco added that the government would implement a tax reform in the second half of this year, starting with personal income tax IRPEF.
In other points, the DEF said that at least 80% of the Italian population would be vaccinated by the end of October. (ANSA).