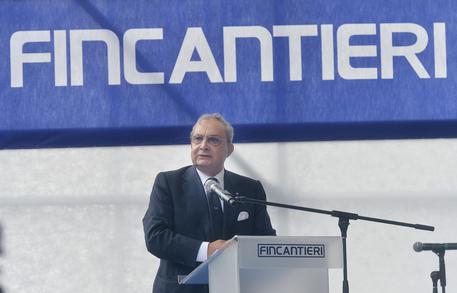 (ANSA) - Lyon, September 27 - Italy and France have reached a deal on Italian shipbuilding group Fincantieri's takeover of the French STX shipyards, Italian government sources said Wednesday.
Fincantieri will have a 50% stake in the Saint Nazaire shipyard plus an additional 1% loaned to it by the French state for 12 years in the deal reached before Wednesday's Italian-French summit in Lyon, French government sources said, confirming a report in Le Monde. France can take back the 1% if Fincantieri does not comply with the deal during those 12 years, they said.
If Paris takes back the 1%, Fincantieri will have the option of selling the 50%, Rome government sources said.
The deal, which also envisages military cooperation by the end of next year, was ratified at a Lyon summit where French President Emmanuel Macron and Italian Premier Paolo Gentiloni saw eye-to-eye on a range of issues including collaborating to construct a better Europe.
Gentiloni said at a press conference with Macron that "Italy and France are united by a European impetus which I recognised in the speech Macron made at the Sorbonne and which we greatly need now that the eurozone has started growing again".
Gentiloni said that "each ministry will have its working plan for the next few months, it is very important that the message arrives that Italy and France have a common work programme for the coming months".
Gentiloni said that "now is the time for ambition. Changes will not take place in a month, they do not all have the same deadlines but it is time to put this European impetus on the European agenda. Now there are the conditions to try to go forward. We must do so together with Germany, a fundamental partner for a European relaunch and with a format open to all willing countries".
Gentiloni said that ""Europe must be an engine for investments, work and growth, initiatives like common budgets are not only architecture, super controllers are not needed but we have to reinforce the drive towards unity to create growth, development, investments and jobs".
Gentiloni said that "Europe must be a force for stabilisation and peace above all in the Mediterranean and in Libya". Macron said that "we went into the details of the joint road map to map out the work of the coming months. We tackled important bilateral issues, on which together we can go forward with concrete projects for the next few months".
Macron said that there was a "full commitment" by both sides to complete the Turin-Lyon high-speed rail (TAV) line.
Macron said that "there will be intense military cooperation and it will be improved with the launch, with our industries, of a global naval leader", referring to the Fincantieri-STX deal.
Macron said that the Fincantieri-STX deal was a "win-win accord". He added: "To those who think it's terrible that there is a non-French operator, I remind them that the shareholder was Korean before. is a Korean better than an Italian?" Macron said that "both STX and the Turin-Lyon (high-speed rail line, TAV), see France and Italy winning". The ownership of STX, where France and Italy are working, Gentiloni, to create a global player, is now thus constituted: 50% Fincantieri, 34.34% French State, 10% Naval Group, 3.66% local companies, 2% workers. The board is made up thus: 8 members, of whom 4 from Fincantieri, 2 from the French State, one representing workers and one the Naval Group. The president and CEO will be up to Italy to name, while France will have a veto over the appointments, it was reported after earlier reports that France's Laurent Castan would remain president.
Fincantieri shares fell 2% on the Milan bourse on news of the deal. The deal, which sets up a global leader with revenues of 10 billion euros, "is an improvement on the previous one from all standpoints", Italian industry and economy ministry sources said. The Italian shipbuilding group "will have direct control of 51% (of the Saint Nazaire shipyards), something not granted in the previous accord which envisaged 48% for Fincantieri and 4% for an Italian financial institution". They said the Italian group "will also have the president, managing director and majority on the board via the casting vote". The deal sets up the "construction of a world leader in the naval, civil and military sector, through an equal partnership between Italy and France", the sources said. The 1% of STX loaned by the French government for 12 years can be revoked for non-compliance with the terms of the deal, the sources noted, saying this provision was already in the previous accord.
The Trieste-based company had been set to take over the company but the French government exercised pre-emption rights on STX capital in July, blocking the takeover and causing considerable tension with Rome. Paris had called on Fincantieri to accept an offer to divide STX's capital 50-50. But at the time Rome said it would not accept a deal in which Fincantieri did not have control of STX. photo: Fincantieri CEO Giuseppe Bono