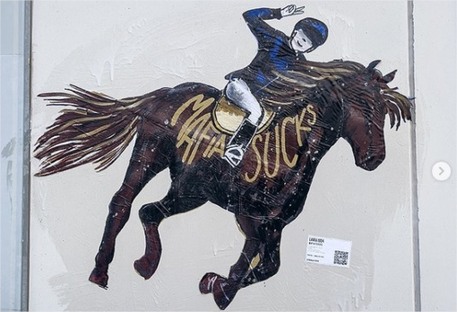 (ANSA) - ROME, JAN 24 - A piece of street art put up near Matteo Messina Denaro's jail commemorating a 13-year-old boy dissolved in acid by the Mafia boss caught a week ago after 30 years on the run has now been removed, without explanation.
The mural by street artist Laika showed Giuseppe Di Matteo in a well-known image of him riding a horse, on which the words "Mafia sucks" were emblazoned.
The teenager was murdered to punish his father Santino Di Matteo for becoming a Cosa Nostra informant.
Laika painted the image a few metres from the top-security prison in L'Aquila where 60-year-old Trapani superboss Messina Denaro is being held after his capture in a Palermo cancer clinic last Monday.
"I did this poster a few days before reading the words of Santino, Giuseppe's father, who declared his son's 'victory', because with Messina Denaro's arrest all the men who committed that heinous crime which at the time shocked the whole country are finally in prison," said Laika, a 34-year-old street artist from Rome whose works usually appear in the Italian capital.
"The Mafia sucks, I don't think many more words are needed than that".
Local officials are being south for an explanation of why the mural was removed. (ANSA).