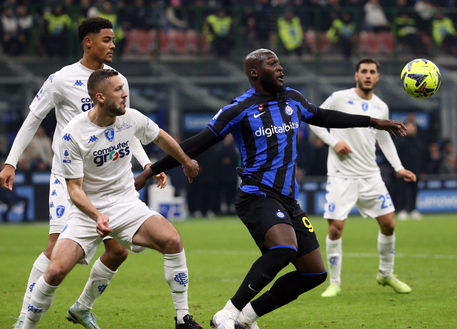 (ANSA) - ROME, JAN 24 - Inter Milan are 13 points behind leaders Napoli at the Serie A season's half-way stage after they suffered a shock 1-0 defeat to Empoli at San Siro on Monday.
Inter were in 10 for much of the match after defender Milan Skriniar, who has been linked to a move to Paris Saint-Germain, got a second yellow card in the first half.
Tommaso Baldanzi grabbed the winner for the visitors after the break.
Third-placed Inter have 37 points form 19 games, while Napoli have 50 after beating Salernitana 2-0 at the weekend.
Champions AC Milan, who are second with 38 points, can trim Napoli's lead back down to nine points by beating sixth-placed Lazio in Rome later on Tuesday. (ANSA).