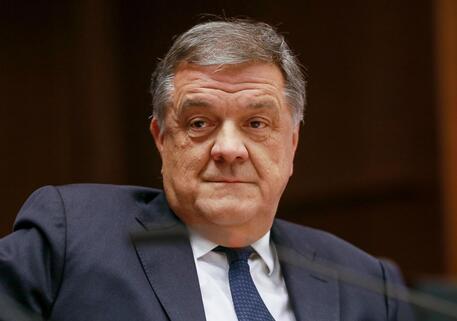 (ANSA) - ROME, JAN 24 - Jailed former MEP Antonio Panzeri is set to implicate more MEPs in the Qatargate scandal after agreeing to cooperate with Belgian prosecutors, a lawyer representing another key figure in the case, Greek MEP Eva Kaili, said on Tuesday.
Panzeri last week cut a plea bargain for a one-year jail term with Belgian prosecutors probing alleged attempts by Qatar and Morocco to influence EU affairs via bribery.
"Messages and news reports are arriving saying that Panzeri will give new names of Italian, German, Belgian and French MEPs," Kaili's lawyer Michalis Dimitrakopoulos told Greece's Kontra television.
Panzeri has been charged with corruption along with fellow Italians Francesco Giorgi, an assistant to Democratic Party (PD) MEP Andrea Cozzolino and Niccolo' Figa'-Talamanca, the secretary general of the No Peace Without Justice NGO.
Kaili, who was removed from her position as European Parliament vice president after the scandal exploded and has been in jail since December 9, has been charged too.
She is Giorgi's partner.
The Panzeri family accountant has been arrested by Milan prosecutors on a European arrest warrant issued by Belgian prosecutors in relation to the case and the former MEP's wife and daughter are in the process of being extradited to Belgium.
Dimitrakopoulos said that Panzeri was "completely unreliable" after reaching the deal with prosecutors.
"He is only interested in saving his wife and daughter," he continued.
"He'll sign whatever they give him".
Cozzolino, meanwhile, told the European Parliament's justice committee that he was ready to forego his immunity from prosecution, his lawyers said on Tuesday.
The committee is set to hold a first vote on January 31 on whether to grant prosecutor's requests for the immunity of Cozzolino and Belgian MEP Marc Tarabella to be removed. The floor of the European Parliament will have the final say.
Cozzolino, who denies any wrongdoing, told the committee that he was the victim of a "violent press campaign that is devastating my family on the basis of a mew suspicion".
Cozzolino has been suspended by the PD and he suspended himself from the Socialist (S&D) caucus in the European Parliament.
(ANSA).