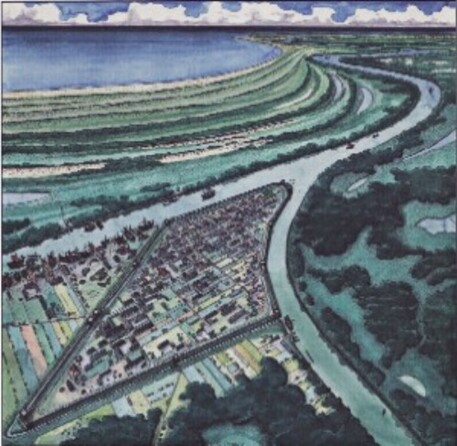 (ANSAmed) - FERRARA, DECEMBER 21 - The National Archaeological Museum of Ferrara is hosting, starting Thursday through April 23, the exhibit 'Spina etrusca. Un grande porto nel Mediterraneo" (Etruscan Spina. A great port in the Mediterranean). The show was organized on the 100th anniversary of the discovery - which occurred during decontamination work on the lagoon - of the Etruscan city on the delta of the Po river.
The show, which highlights connections with today's Mediterranean routes, uses the digital reconstruction of landscapes and ancient history to showcase to the public the importance of the great port of Spina for Etruscans in the fifth century BC and for Mediterranean citizens in 2022. The show will then transfer to Rome, at the National Etruscan Museum of Villa Giulia.
The exhibit is organized to explain the role played by Spina as a fundamental hub connecting the main cities of the Mediterranean in the archaic and classical ages, a meeting point for goods, people and cultural inspiration of different provenance, in close contact with Athens and the main centres of ancient Greece. The exhibit highlights the exceptional role of the Adriatic port of Spina, shedding light on similarities and differences with the great Etruscan settlements of the Tyrrhenian Sea and with the twin city of Cerveteri, to illustrate the social structure, cultural and ethnic variety, expressions of the aristocratic élites, the vocation as a port and importance of dynamics of ancient trade. Technology is used to recreate the landscapes and heritage of the ancient site. The findings exhibited hail from Italy's main archaeological museums, other important material from the Metropolitan Museum of Art in New York, with the contribution of the Emilia-Romagna region. Scientific and educational initiatives have been coordinated by the General directorate of museums in collaboration with the Regional direction Emilia-Romagna and the archaeological superintendency, with local administrations and universities that carried out research and excavation work on the ancient settlement: Bologna, Ferrara and Zurich.(ANSAmed).