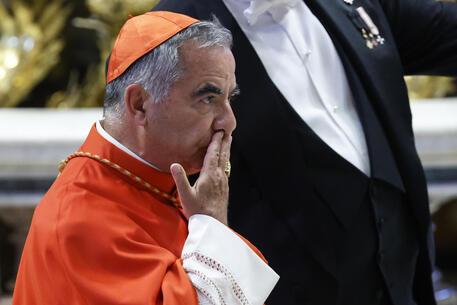 (ANSA) - ROME, NOV 25 - Cardinal Angelo Becciu, the highest ranking Vatican cleric to be tried for financial crimes, told his family in a recent chat that Pope Francis wanted him dead, La Repubblica and Corriere della Sera dailies reported online Friday.
"He wants me dead" and "I didn't think we'd get to this point" were two of the comments reportedly made public by the Vatican's promoter of justice Wednesday in the trial into alleged mismanagement of Vatican funds including a London property on Sloane Avenue.
"I didn't think we would get to this point: he want my death," Becciu said in a message to his relative Giovanna Pani on July 22 last year, the promoter reportedly said.
This was two days before, as revealed Thursday, Becciu secretly taped a phone conversation with the pope with the help of Pani's daughter, and Becciu's niece, Maria Luisa Zambrano.
In the chat, Pani urges Becciu to be brave saying "you'll see that the truth will triumph", to which he replied "for now it is they who are triumphing and transfixing us!", adding "victory will go to the honest".
Pani also writes to Becciu: "He's bad, he wants your end," referring to "su Mannu", Sardinian for "the big guy" and therefore the pope.
The cardinal replies: "He doesn't want to make a bad impression over the initial conviction he gave me" and also "I would never have imagined that a man, let alone a pope, would go so far".
Pani replies to this: "He's a great coward, but you fight and let your truth shine out, it's hard I know, courage, we'll win fully", and adds: "there's something rotten in the Vatican".
The messages were intercepted by finance guards from Oristano.
(ANSA).