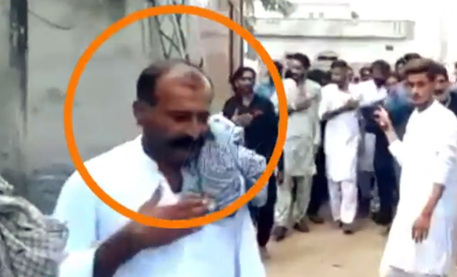 (ANSA) - ROME, NOV 24 - The father of Saman Abbas, an 18-year-old Pakistani-Italian woman who disappeared from Novellara near Reggio Emilia on the night of April 30-May 1 last year and is believed to have been killed by her family after refusing an arranged marriage in Pakistan, has said she is alive, according to sources at an extradition hearing in Islamabad Thursday after his recent arrest in his home country, where he and his wife, who is still a fugitive from justice, fled after their daughter went missing.
The man, Shabbar Abbas, was granted seven days to examine documents from Italian prosecutors who have requested his extradition.
A Reggio Emilia court said Tuesday that it was "highly likely" that human remains found at the weekend near the family home at Novellara belonged to Saman Abbas.
Granting prosecutors' request to have the DNA of the remains filed as evidence, the court of assizes said "the location of the discovery and the careful burial lead us to deem as highly likely that it may be the body of the young woman".
Abbas's uncle, who is believed to have strangled her, took police to the spot near the family home where previous searches had been fruitless because she had been buried over two metres down.
The uncle, Danish Hasnain, accused of the murder with two of Saman's cousins, her father Shabbar and mother Nazia, took police to a site where the family is believed to have disposed of the body.
Police teams and sniffer dogs had previously failed to find any remains at the spot because they were covered by over two metres of earth, police said.
Hasnain has been accused by Saman's brother of being the actual killer, strangling the young woman after she refused to marry an older man in Pakistan and thus 'dishonoured' the family, police said.
The family also disapproved of Saman's western lifestyle and her Italian boyfriend.
Her father was arrested in Pakistan last week and is awaiting extradition while her mother is still on the run in the Asian country.
A preliminary hearings judge (GUP) indicted the uncle, Hasnain, and her two cousins, Ikram Ijaz and Nomanhulaq Nomanhulaq, who were arrested in France and Spain respectively after fleeing Italy.
Also indicted, in absentia at the time, were Saman's parents, Shabbar Abbas and Nazia Shaheen.
The trial will start on February 10 next year. (ANSA).