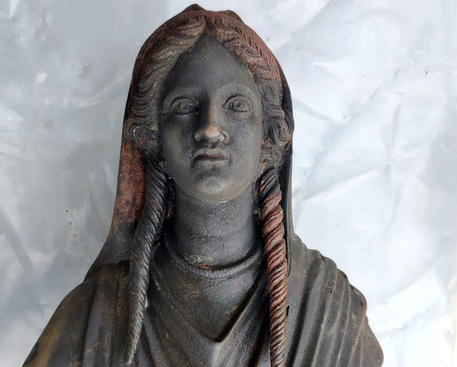 (ANSA) - SAN CASCIANO DEI BAGNI, NOV 8 - Lying on the bottom of the large Roman 'vasca' or pool, the young and very beautiful ephebe seems to be sleeping. Next to him is Hygeia (Igea), the goddess of health who was the daughter or wife of Asclepius, with a serpent curled on her arm. A bit farther away, also partly submerged, you can see Apollo, and then other divinities, matrons, youths, and emperors.
Protected for 2,300 years by the mud and boiling water of the sacred pools, a never-before-seen votive array has re-emerged from the excavations at San Casciano dei Bagni, in Tuscany, with over 24 extremely finely wrought bronze statues, five of them almost one metre tall, all complete and in a perfect state of preservation.
"It's a discovery that will rewrite history and one which more than 60 experts from all over the world are already working on," archaeologist Jacopo Tabolli tells ANSA in an exclusive preview.
The young professor from the University for Foreigners of Siena has been leading the project since 2019, on a permit from the Ministry of Culture and the support, also financial, of the small town's municipal council.
It's an "absolutely unique" treasure trove, he underscores, which has been accompanied by an incredible quantity of inscriptions in Etruscan and Latin as well as thousands of coins and a series of equally interesting plant offerings.
After taking up office only a handful of days before, Minister or Culture Gennaro Sangiuliano has already visited the conservation laboratory that has just welcomed the statues and now applauds "an exceptional discovery that confirms once again that Italy is a country full of huge and unique treasures".
"The layering of different civilizations is a unique feature of Italian culture," enthuses the head of the Collegio Romano.
"It's the most important discovery since the Riace Bronzes and is certainly one of the most significant discovery of bronzes ever made in the history of the ancient Mediterranean," says, beside him, the ministry's director general of museums, Massimo Osanna, who has just approved the purchase of the 16th century palazzo that will house the marvels yielded by the Great Bath in the village of San Casciano, a museum which will be flanked in the future by a full-blown archaeological park.
Luigi La Rocca, general director for archaeology, shares their enthusiasm and stresses "the importance of the method used in this excavation", which as was the case of the most recent discoveries at Pompeii, also here saw the involvement of "specialists from all disciplines, from architects to geologists, and from archaeo-botanists to experts in epigraphy and numismatics".
Fashioned in all likelihood by local craftsmen, the 24 statues that have just been found can be dated between the second century BC and the first century AD, explains Tabolli, speaking alongside the field director Emanuele Mariotti and Ada Salvi from the Superintendency.
The shrine, with its bubbling hot pools, its sloping terraces, its fountains, and its altars, existed at least from the third century BC and remained active until the fifth century AD, Tabolli says, when in Christian times it was shut down but not destroyed, its pools sealed with heavy stone pillars, and the divinities entrusted respectfully to the water.
It is also for this reason that, having removed that covering, the archaeologists found themselves looking at a still-intact treasure trove, in effect "the greatest store of statues from ancient Italy and in any case the only one whose context we can wholly reconstruct," says Tabolli.
Partly arranged on the branches of a huge tree trunk set into the bottom of the pool, and in many cases covered with inscriptions, the statues, like the countless votive offerings, came from the great families of the local area and beyond, members of the elites of the Etruscan and the Roman worlds, landowners, local lords, affluent classes from Rome and indeed also emperors.
Here, surprisingly, the Etruscan language appears to have survived much longer than what has hitherto been assumed, and Etruscan knowledge in the medical field appears to have been recognized and accepted in the Roman era too.
In short, it is a great shrine that appears to recount itself as a unique place for the ancients too, a sort of a bubble of peace, if you think, as Tabolli explains, "that even in historical epochs in which the most awful conflicts were raging outside, inside these pools and on these altars the two worlds, the Etruscan and Roman ones, appear to have co-existed without problems".
Perhaps, the archaeologist posits, because of the fact that water had since its origin remained the presiding deity with its divination, force and power: "Here time passes, language changes, even the names of the deities change, but the type of worship and the therapeutic intervention remain the same." The excavation work will now stop and resume in the spring.
Winter will be used for restoring, studying and understanding.
"It will be team work, as it has always been so far," proudly smiles Tabolli.
The work will involve the university, the ministry, the local town council, and specialists from other universities from all over the world. All together, with a unique opportunity for writing an entirely new chapter in ancient history. (ANSA).