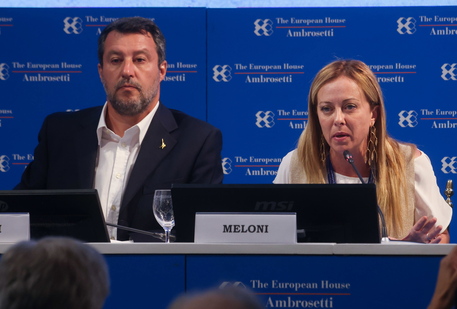 (ANSA) - ROME, SEP 22 - League leader Matteo Salvini on Thursday disagreed with Brothers of Italy (FdI) leader Giorgia Meloni on her picking ministers for a likely new centre-right-rightwing government on her own if as expected she becomes Italy's first woman premier after Sunday's general election.
Meloni said earlier Thursday that she had various ideas of a cabinet and would exclude anyone serving in Mario Draghi's outgoing administration.
This was taken as an indication that she already had a list of likely ministers in her pocket.
But Salvini stressed that the centre right, which also includes Silvio Berlusconi's Forza Italia (FI) party, was a team that would pick the cabinet together.
"We'll draw up the list of ministers together, we are a team," he said.
"There are no men or women in sole command, we'll build the team together".
He added: "Everyone has their ambitions, their legitimate aspirations, let's wait for the Italians' vote and then we'll build the team together".
The most recent polls say the centre right, spearheaded by FdI, will win a big majority in parliament, and possibly the two thirds majority it would need to introduce presidentialism by changing the Constitution without a referendum. (ANSA).