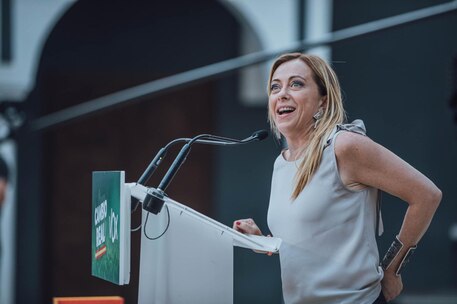 (ANSA) - ROME, SEP 21 - The already tense campaign for Sunday's general election has heated up further after Brothers of Italy (FdI) leader Giorgio Meloni told Spanish agency EFE that she hopes a victory for the centre-right coalition that her party is spearheading will pave the way for a triumph by the far-right Vox group in Spain.
"Vox is truly a neo-fascist party," said Carlo Calenda, the leader of the Azione party that belongs to the centrist 'Third Pole'.
"I have never said it would be an alarm for democracy (if the centre right wins on Sunday), but if Meloni starts saying she wants Vox in government, tomorrow it'll be Le Pen, Orban and maybe the AFD, so you have to watch out because these people are openly fascist".
Enrico Letta, the head of the centre-left Democratic Party (PD), said he was not surprised by Meloni's endorsement, adding that a Vox victory in Spain would by a "terrible signal for Europe".
PD Lower House whip Debora Serracchiani said Meloni had "taken off the mask" by supporting Vox.
Letta has said Italian democracy will be in peril if the centre-right alliance wins the election, especially if it gains 70% of the seats in parliament and is able to change the Constitution without a referendum.
He and Meloni had sparred earlier this week when he went to Berlin and got the endorsement of Germany's Social Democrat Party (SPD), with SPD Co-leader Lars Klinhgbeil calling FdI a "post-fascist" party.
Meloni accused of Letta of trying to win the "protection of foreign powers" rather than the support of the Italian people.
While the PD was a close second to FdI in the polls before a pre-vote survey blackout kicked in, the centre-right coalition as a whole had a lead of almost 20 points over the centre-left bloc.
As a result, Meloni is tipped to become Italy's first woman premier after the election. (ANSA).