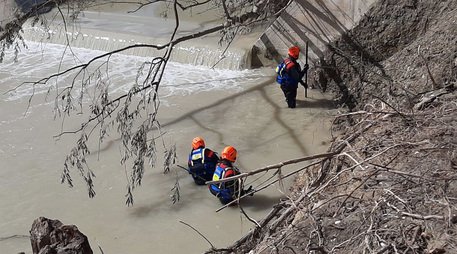 (ANSA) - ROME, SEP 20 - Rescue workers said Tuesday that they have found the tennis shoes of Mattia Luconi, an eight-year-old boy who is missing after last week's deadly storms and floods in Marche.
Mattia was snatched out of his mother's arms by flood waters on the evening of September 15 in the area of Castelleone di Suasa.
On Monday the boy's backpack was found some eight kilometers from where he went missing.
A 56-year-old woman is also missing-feared-dead after the storms. in which 11 people are confirmed to have died.
The storms caused massive damage too.
Ancona Chief Prosecutor Monica Garulli has said the failure to alert in advance the towns hit by last week's deadly storms in Marche is one of things her investigation is looking at.
"In terms of the dynamics of events, what has been found at the moment is that there was no alert from the Marche regional government to the towns (affected)", Garulli told RAI televisions.
"The investigation is at an initial stage".
Some experts have said it was impossible to forecast the level violence of the extreme weather that hit Marche last week even though torrential rain was expected.
Scientists say climate change caused by human activity is making extreme weather events such as these storms more frequent and more intense.
Premier Mario Draghi linked the disaster to the climate crisis when he visited the area on Friday.
"What happened today shows how the fight against climate change is fundamental," he said. (ANSA).