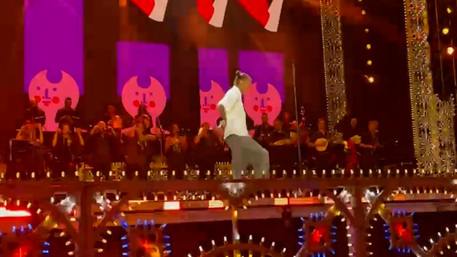 (ANSA) - MELPIGNANO, AUG 30 - The Taranta of the future was performed on stage at Melpignano in Puglia Saturday night with the innovative electro-pizzica of Dardust, who fired up the public for three hours, 200,000 people according to the organizers from the afternoon to dawn, at the 'Concertone' of the 25th Notte della Taranta.
A "space night" as master concertist Dardust defined it, a trip through time and space that started with the tradition of the tamburello, the absolute protagonist, and flirted with new worlds and the futuristic sounds of electronic music.
The international guest at this edition, Belgian rapper Stromae, proposed a pizzicata version of his famous piece "Alors On Danse", with inroads into popular music, on whose rhythms the rapper essayed pizzica steps, beating his hands to the rhythm of the tamburello and dancing with his feet like pizzicati dancers.
On the stage of the Concertone, the traditional pieces of the Salentine popular repertoire performed by the Taranta Orchesta were joined in turn by pop artists Marco Mengoni, whose unmistakable voice sang the traditional song Klama in griko and then his hit "Ma stasera"; and Elodie who sang and danced the St Vitus pizzica and then offered a pizzicata version with the tamburelli of her hit "Tribale".
Romagna-born singer-songwriter Samuele Bersani performed the heart-rending love song "Lu Ruciu de lu mare" and then his own hit "Chicco e Spillo".
And then there were the rapper Massimo Pericolo, the Tuscan musician Kety Fusco and her electric harp, and the band Studio Murena.
Between one song and the next, in a journey across the sounds and rhythms of the Salentine pizzica, Dardust, himself playing the tambourine and other instrumental pieces, inserted tributes to the international pop-rock world, from David Bowie to the Cure, passing through the Chemical Brothers and Goran Bregovic, who was master concertist of the Taranta 10 years ago, opening the event, even at that time, to the contamination of Balkan music.
In Dardust's electronic taranta, 10 of the 30 pieces performed were accompanied by choreography by Irma Di Paola, 10 moving pictures, like theatrical frescoes moving to the pizzica rhythm, in some cases pushing the innovative vocation of this edition towards unexpected horizons, "fluid" ones as Dardust called them.
It was such an innovative Taranta that it pushed the concept of contamination not only to musical genres, with choreography that included drag queens and the visual projections, sometimes psychedelic, of Filippo Rossi, framed by the typical lamps of traditional Salentine parties.
Without forgetting the tribute to Pier Paolo Pasolini, on the centenary of his birth, with a previously unheard piece based on the popular poetry taken from his "Canzoniere italiano".
The customary closure of the Concertone, with Kalinifta performed by Madame, Elodie, Mengoni, Bersani and the voices of the popular orchestra, again made the public explode, now in the depth of the night, arms waving to the sky and clapping hands to the rhythm of "Larilò larilò lallerò, larilò larilò llà llà".
The long night of Melpignano, with Madame an exceptional narrator, will be broadcast on Rai 1 on September 1, at 23:15.
photo: Stromae dancing the pizzica (ANSA).