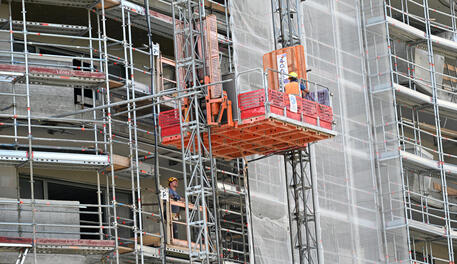 (ANSA) - ROME, AUG 30 - Italy has seen 569 fatal workplace accidents in the first seven months of the year, workplace accident insurance agency INAIL said Tuesday.
That is 16% down on the same period last year, it said.
Some 441,451 workplace accidents were reported from January to July this year, 41.1% up on the same period last year.
Pathologies of a professional origin were up 6.8% to 36,163.
INAIL said the fall in deaths was largely due to a fall in COVID deaths.
But the rise in accidents was also partly due to a rise in COVID-linked accidents, the agency said.
Italy is in the middle of a long and shocking spate of workplace accidental deaths, dating back to the spring of last year.
In the latest incident, a 42-year-old worker was run over and killed by a van while cutting grass near a service station on a northern Italian highway Thursday.
Four other workers died on the job in one recent week including one at the foreign ministry in Rome.
The government has taken several steps to try to stem the tide of deaths but the spate, which grabbed public attention over a year ago with the death of a 22-year-old mother of a five-year-old boy, Luana D'Orazio, in a textile mill accident near Prato on May 3, 2021, has continued unabated.
The recent fatalities were the latest in a shocking wave of workplace accident deaths in Italy that saw 1,221 perish last year and which has spurred government action.
Such deaths are a national tragedy, outgoing Justice Minister Marta Cartabia said on October 22. She said the government had intervened by increasing the number of inspectors and checks, but a new law on administrative responsibility would be even more useful in stopping the rash of fatalities.
Premier Mario Draghi said on October 17 that workplace safety norms recently approved by the government sent the "unequivocal signal that you cannot save (money) at the expense of workers' lives" after the spate continued with four more deaths in one day. "As the government, we committed ourselves to doing everything possible to prevent these episodes happening again," Draghi said. "The norms are the realisation of this promise. We are increasing the numbers of workplace inspectors, we are stiffening sanctions, we are boosting computerization to improve checks." Despite this, as the deaths continued, Italy's big three trade-union confederations, CGIL, CISL and UIL, held a major demonstration in Rome in mid-December to demand further urgent action on health and safety.
Turin held a day of mourning on December 21 for three workers who died when a large crane collapsed in the northern city the previous weekend.
Re-elected President Sergio Mattarella said in his second inaugural address in February that such deaths must stop, while Pope Francis has also joined the chorus against the phenomenon.
The government recently unveiled a fresh set of measures to up workplace safety. (ANSA).