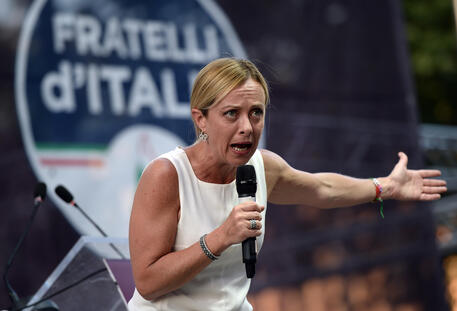 (ANSA) - ROME, AUG 4 - An initial draft of the right/centre-right coalition's manifesto for the September 25 general election, which ANSA has seen, stresses that Italy would maintain its position at the centre of the European Union and NATO with a government led by it.
The 15-point manifesto is entitled "Italy, tomorrow. Framework Programme for a Centre-right Government". The first point, written in bold, states that Italy is "full member of the Europe, of the Atlantic Alliance and of the West.
"More Italy in Europe, more Europe in the world," it continues.
The second point of the draft refers to the efficient use of EU funds.
The third regards structural and institutional reforms, including changes that would see the Italian president elected directly by the people, instead of by lawmakers and regional representatives.
The fourth pledges to deliver a "fair" tax system, with a flat-tax regime for the self-employed being extended to all those earning up to 100,000 euros a year.
The manifesto also refers to the need to help families and encourage people to have children, measures to boost security and stop illegal immigration, and efforts to support the needy.
The document says becoming self-reliant for energy and protecting the environment were priorities.
The section on agriculture stresses that the sector is both "our history and our future".
The 14th point regards school, university and research.
The 15th focuses on young people and sport.
Polls suggest the centre right is set to win the election, with Giorgia Meloni's right-wing Brothers of Italy (FdI) party, which is currently top of the opinion surveys, expected to be the driving force. If the centre right does win and FdI is the party to get most votes, Meloni is likely to become Italy's first woman premier. Last week Meloni said that Italy will be a reliable international partner if a right/centre-right coalition wins.
"We reiterate that we will guarantee, with no ambiguity, the Italian position (on the international arena) and the absolute support of the heroic battle of the Ukraine people (against the Russian invasion)," Meloni told her party's national directorate.
"We can say that an Italy led by Brothers of Italy and the centre right will be an Italy that is reliable at the international level". (ANSA).