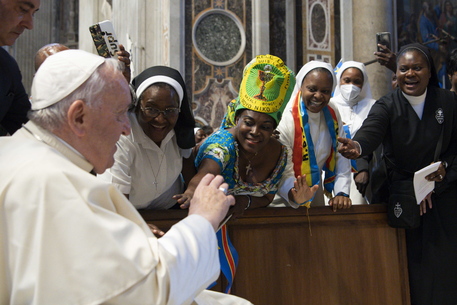 (ANSA) - ROME, JUL 5 - Pope Francis has denied wanting to quit or having cancer, two rumours prompted by the announcement he is to visit the shrine of a medieval pope who resigned at the end of the 13th century like Francis's predecessor Benedict XVI.
The rumour mill was set in motion by the Vatican announcement that Francis will visit Celestine V's shrine in central Italy in mid August.
Benedict shocked the world in 2013 when he became the second pope since Celestine to abdicate, for reasons of advancing age and increasingly frail health.
Celestine's abdication after only five months on the throne of St Peter in 1294 earned him the condemnation of Dante in Hell, with the Florentine poet blasting the hermit pope for his 'great refusal".
Francis has taken to using a wheelchair due to a knee issue in recent months but he told Reuters Monday that he had no intention of imitating his immediate predecessor and quitting for ill health.
He also squashed the rumour that he had cancer.
Francis is now the same age as Benedict when he stepped down, 85.
The Argentine pope has said it is OK for pontiffs to resign if they think they are not up to the job. (ANSA).