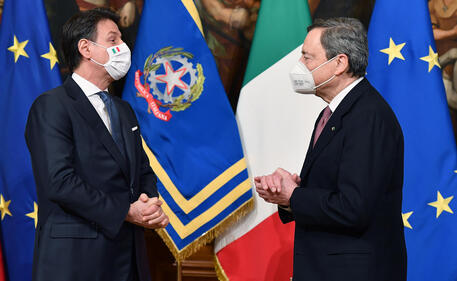 (ANSA) - ROME, JUL 1 - Premier Mario Draghi and his predecessor, 5-Star Movement (M5S) leader Giuseppe Conte, are starting de-escalation talks on Friday amid massive tension within the ruling alliance that has led to talk of a possible crisis of government.
Draghi was set to speak to Conte on the telephone on Friday ahead of a face-to-face meeting on Monday, sources said.
A massive row broke out this week when Conte complained that he had heard that Draghi allegedly asked M5S founder and stand-up comic Beppe Grillo to oust the former premier from the movement.
Draghi denied this, saying he would clear the matter up with his predecessor as premier.
Draghi said Thursday that Conte had "confirmed" the M5S will not be exiting the government for an external support.
"I'm optimistic, the government is not at risk and it will not go on without the M5S," said Draghi, ruling out a reshuffle and saying that the success of the government's action was also due to the "generosity" of the broad national-unity majority backing it.
"I never made the statements attributed to me about the M5S", he said.
Friction within the ruling coalition was already high after Foreign Minister Luigi Di Maio recently quit the M5S to form his own group after a big row with Conte over military aid for Ukraine following the Russian invasion.
Di Maio said Conte's calls for the government to stop sending weapons to Kyiv risking putting Italy out of synch with respect to its EU and NATO allies. (ANSA).