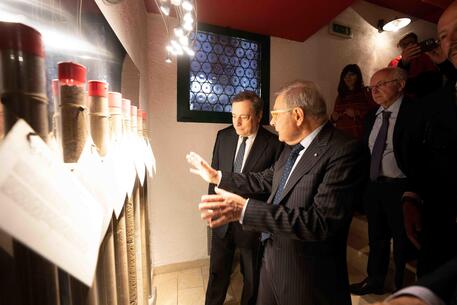 (ANSA) - ROME, MAY 26 - Italian Premier Mario Draghi on Thursday called Russian President Vladimir Putin over the Ukraine war, the Kremlin said, according to TASS.
Putin told Draghi that Russia will ensure an uninterrupted supply of gas to Italy, the Kremlin said.
He said Russia is ready to help fight the food crisis sparked by the war in exchange for sanctions being revoked, it said.
Putin told Draghi that negotiations had been suspended by Kyiv, the Kremlin said.
It also said Putin said Moscow is trying to ensure safe navigation in the Sea of Azov and the Black Sea, saying that Ukraine is hampering these efforts.
The premier's office said Draghi and Putin "focused on developments in the situation in Ukraine and on efforts to find a shared solution to the ongoing food crisis and the grave repercussions on the world's poorest countries".
Russian Foreign Minister earlier rejected the Italian peace plan for Ukraine as "not serious".
Italy's four-stage plan would feature a ceasefire, talks on Ukraine's 'international status', i.e. whether it is neutral, a bilateral agreement between Kyiv and Moscow on the contested areas of Crimea and Donbass, and a multilateral agreement on peace and security in Europe.
"Serious politicians who want to achieve results and are not engaged in self-promotion for their electorate cannot propose this kind of thing," Lavrov told Russia Today.
Lavrov reiterated that Italy has not sent the plan to Moscow but "what appears in the media provokes a feeling of sorrow".
He appeared to be referring to the idea of the Donbass and Crimea being under Ukrainian sovereignty with an autonomous status, Moscow watchers said. (ANSA).