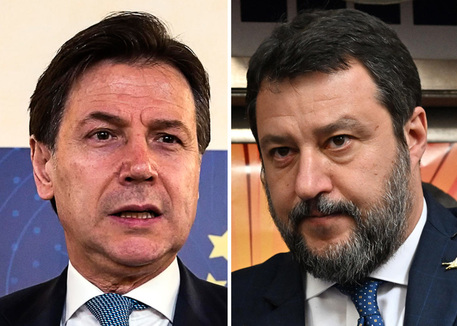 (ANSA) - ROME, MAY 19 - Tension within Premier Mario Draghi's ruling coalition over the policy of giving military aid to Ukraine after the Russian invasion continued on Thursday with rightwing League leader Matteo Salvini and anti-establishment 5-Star Movement (M5S) leader Giuseppe Conte reiterating their opposition to Italy sending any more weapons. "Someone in this chamber has spoken of sending more arms. I don't accept that," Salvini said after Draghi reported to the Senate on the Ukraine war following his meeting with United States President Joe Biden at the White House last week.
The League leader also stressed that "we are for democracy, never for war, and with the people, never with the aggressors".
The premier had pointed out that parliament has passed a resolution committing the government to providing humanitarian and military aid to Kyiv.
On Wednesday Draghi had said Italy was willing to send more arms to Ukraine if necessary but ultimately the decision lay with the European Union.
Conte reiterated his call for a new vote on the policy of giving military support to Ukraine, saying the existing resolution on this issue should be "updated".
"As for sending weapons, our position is that we've given enough already," Conte said. (ANSA).