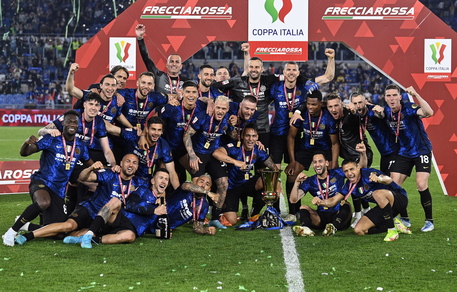 (ANSA) - ROME, MAY 12 - Inter fans are savouring their eighth Italian Cup triumph after Simone Inzaghi's men beat old rivals Juventus 4-2 after extra time in Wednesday's dramatic final at Rome's Stadio Olimpico.
Nicolo Barella put Inter ahead with a superb strike in the first half.
But Juve hit back with goals after the break by Alex Sandro and Dusan Vlahovic and looked the stronger side for most of the second half.
But the match turned when Inter were awarded a soft penalty for contact by Leonardo Bonucci on Lautaro Martinez in the area and Hakan Calhanoglu smashed the spot kick home on 80 minutes to send the contest into extra time.
Ivan Perisic converted another penalty and scored with a fine strike from outside the box to seal it for Inter.
It is their second trophy of the season after they also beat Juve 2-1 in the Italian Super Cup in January.
There are still in the running for a third title as they are second in Serie A, two points behind leaders AC Milan, with two games to go until the end of the championship.
"We put in a great performance against a strong opponent," said Inzaghi.
"We did really well in the first half an hour, but we lost our shape a little in the final 15 minutes before half time.
"Our approach to the second half was poor and we let in two goals. We should have remained more focused, but this team never gives up, as I know.
"It's not just this evening, but since (I took over the team on) 8 July, that I've seen them do that.
"Now we have two league games to play as best we possibly can, but it's right that we enjoy the celebrations with the fans. I'm happy for the lads, the club and the fans." (ANSA).