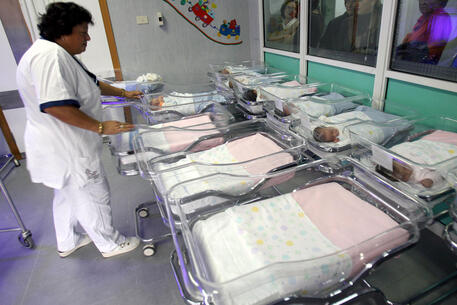 (ANSA) - ROME, MAY 12 - Pope Francis and Italian President Sergio Mattarella both made appeals for action to combat Italy's declining birth rate on Thursday as the two-day 'General States of Birth' meeting got under way in Rome.
National statistics agency ISTAT, meanwhile, warned that Italy's population will be down by five million by 2050 if the trend is not reversed.
"The issue of the birthrate is a real social emergency that is not immediately perceptible like other problems that occupy the news," the pontiff said.
"Fewer children are being born and this means impoverishing everyone's future.
"Italy, Europe, and the West are impoverishing their future".
He said that many young people find it hard to realize their dream of having a family.
"The beauty of a family full of children risks becoming a utopia, a dream that is difficult to realize," the pope said.
Mattarella echoed those sentiments in a message to Gianluigi De Palo, the head of the Natality Foundation and the Family Forum, which are organizing the meeting.
He said the phenomenon of falling birth rates was "one of the most worrying aspects of the contemporary social dynamics".
He also pointed out that Article 31 of the Italian Constitution calls for "maternity, childhood and youth" to be protected.
He said women too frequently have trouble obtaining equality on the labour market and having the support needed to conciliate work commitments and family life.
"Professional commitment and work cannot be in opposition to the choice of becoming a mother," he said.
"Policies for the family are an essential contribution to development".
ISTAT President Gian Carlo Blandiardo said that structural measures would be needed to stop the population falling by five million by 2050.
The Italian population fell just under the 59-million mark at the end of 2021 after a net drop of 616,000 residents in two years.
The statistics agency said that, if the trend continues as it is, only 52% of the population will be working age (20-66) in 2050 and they will have to take care of the under-20s (16% of the population) and, at the same time, produce enough resources to maintain the nation's pensioners (32%). (ANSA).