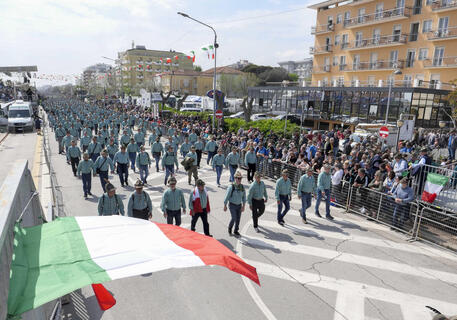 (ANSA) - ROME, MAY 12 - Italian 'Me Too' group Non Una Di Meno (Not One Less) said Thursday that over 500 reports of incidents of sexual molestation had been collected from 160 people regarding this year's rally of the crack 'Alpini' regiment of the Italian army in Rimini.
After a meeting with lawyers and victims on Wednesday, Non Una Di Meno said the fact no criminal complaints had been filed so far did not mean the allegations were false.
"We don't consider it necessary for there to be criminal complaints to believe the truth of the molestations," it said.
"We know that they happened and there were many more than reports we received.
"In this case, however, criminal complaints could be an extra instrument so that the molestations do not occur at every rally and cannot be ignored like in the past".
The president of the national Alpini association, Sebastiano Favero, has said they had not received any police crime reports but if they did measures would be taken.
The Non Una Di Meno group said victims reported being whistled at, having obscene proposals made to them, and in some cases being groped.
Many of the complainants were baristas and waitresses, Non Una Di Meno said.
In this year's annual Alpine regiment rally, over 400,000 people crammed into Rimini and the Romagna Riveria, flooding the coffers of hotels, bars and restaurants over three days packed with events and entertainment.
Defence Minister Lorenzo Guerini said Tuesday that if the allegations were proven, they would be "extremely serious incidents that must be punished".
He stressed: "We will have zero tolerance of these episodes, if proven". (ANSA).