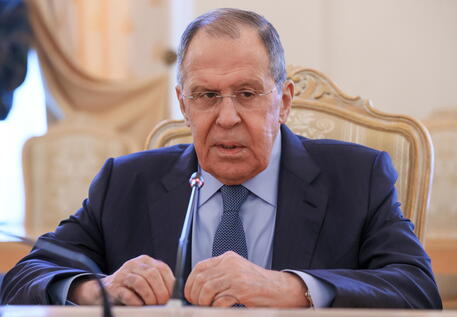 (ANSA) - ROME, MAY 2 - Russian Foreign Minister Sergey Lavrov has angered Israel by telling Italy's Mediaset television on Sunday that the fact Ukraine President Volodymyr Zelensky is Jewish does not mean he isn't a Nazi, saying Adolf Hitler himself had Jewish roots.
Moscow has justified its invasion of Ukraine on the grounds that its neighbour must be "denazified".
On Monday the Israeli foreign ministry summoned the Russian Ambassador to Israel for a clarification on the comments.
"Foreign Minister Lavrov's remarks are both an unforgivable and outrageous statement as well as a terrible historical error," said Israeli Foreign Minister Yair Lapid.
"Jews did not murder themselves in the Holocaust.
"The lowest level of racism against Jews is to accuse Jews themselves of antisemitism." Dani Dayan, the president of the Yad Vashem Holocaust Remembrance Centre in Jerusalem, was furious too.
"The remarks of Russian FM Lavrov are absurd, dangerous and deserve of condemnation," Dayan said via Twitter. "Lavrov is propagating the inversion of the Holocaust - turning the victims into the criminals on the basis of promoting a completely unfounded claim that Hitler was of Jewish descent.
"Equally serious is calling the Ukrainians in general, and President Zelenskyy in particular, Nazis.
"This, among other things, is a complete distortion of the history and a serious affront to the victims of Nazism". (ANSA).