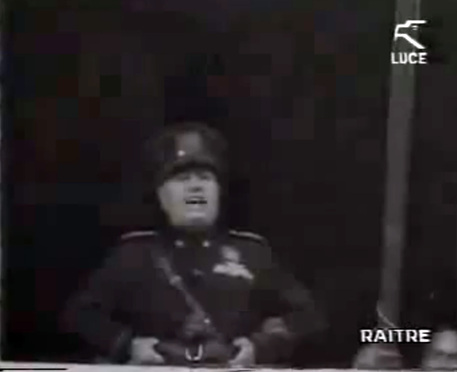 (ANSA) - ROME, APR 13 - An Italian mayor's bid to have Fascist dictator Benito Mussolini stripped of the honorary citizenship his town gave him 98 years ago was defeated by the city council Tuesday night, the Gazzetta di Modena newspaper reported Wednesday.
The council at Carpi in Emilia Romagna failed to approve the motion stripping Il Duce of the honour he got in 1924, falling one vote short of the 17 needed for a majority.
The Mayor, centre-left Democratic Party (PD) member Alberto Bellelli, said he would try again.
Carpi is part of the north-central Italian 'red belt' that used to be governed by Communists and has regularly returned leftwing officials to office, at least until, recently.
The PD hold a majority on the council but the motion to strip Mussolini of his citizenship would have required at least one vote from the far-right Brothers of Italy and League parties, or the populist 5-Star Movement, who all boycotted the vote.
Their councillors said the motion "comes too late and is an attempt to exploit the LIberation Day holiday (on April 25)," when Italy marks liberation from the Fascists and Nazis in WWII.
(ANSA).