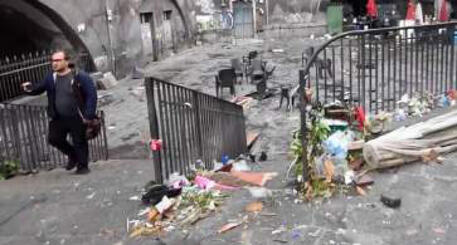 (ANSA) - ROME, MAR 2 - This week's alarming new report by the UN's Intergovernmental Panel on Climate Change's (IPCC) Working Group II said the world is already plunged deeply into the climate crisis, the risks are accelerating and the window to take the necessary action is rapidly closing.
Furthermore, while no-one and nowhere is safe, the Mediterranean is one of the areas of the world that is especially vulnerable.
"There is a whole chapter devoted to the impact in the Mediterranean in the report and it is truly shocking," said Mariagrazia Midulla, WWF Italia's head of climate and energy.
"The consequences of the climate crisis could seriously undermine the foundations of our model of life and our economy, starting with agriculture and tourism, and affect everyone.
"The Mediterranean region is a hotspot for climate risks that are strongly connected between each other because of a particular combination of major multiple climate risks and high vulnerability.
"We should be at the head of the most ambitious countries on climate action and work intensely to adapt to the inevitable impacts.
"We are not doing one or the other and this must change at once".
The report said that the land surface temperature of the Mediterranean had already increased by 1.5°C and this could go up by as much as 5.6°C by the end of the century, depending on the emissions scenario.
It said drought has become increasingly frequent and intense, especially in the countries of the northern Mediterranean, and this could further increase, while the level of precipitation could drop between 4% and 22%.
The risk of coastal flooding could increase by 37% in the Mediterranean in areas that are currently home to 42 million people.
The climate crisis also threatens water supplies, which will affect hydroelectric capacity and agricultural yields.
Areas affected by forest fires could increase by 96-187%.
"The IPCC report highlights the consequences of our inertia," said Midulla.
"The WWF believes world leaders should listen to the warnings of the scientific community and change pace both in terms of action to eliminate the cause of the climate crisis (emissions from the use of fossil fuels, deforestation etc) and action to adapt to the now-inevitable changes and try to minimize the costs for economies and for nature". (ANSA).