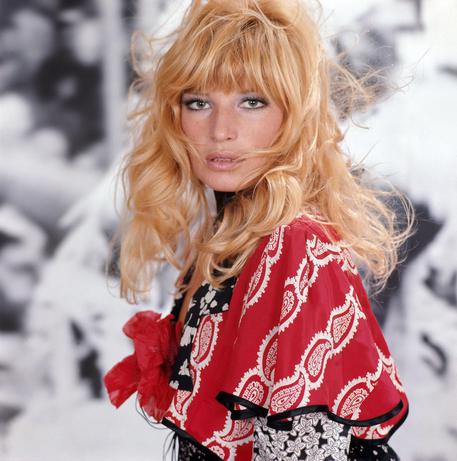 (ANSA) - ROME, FEB 2 - Italian actress Monica Vitti has died at the age of 90, former Rome mayor and cinema critic Walter Veltroni tweeted Wednesday.
Born Maria Luisa Ceciarelli in Rome, on 3 November 1931, Vitti became an Italian and world screen icon, the muse of dark 'incommunicability' maestro Michelangelo Antonioni and later partner of great comic actor Alberto Sordi.
She had been absent from public life due to Alzheimer's since 2001 when she was received at the presidential palace for the Italian Oscars, the David di Donatello Awards.
Veltroni tweeted: "Roberto Russo, her companion in these years, asks me to communicate that Monica Vitti is no more. I do so with great grief, affection, and nostalgia".
Vitti, who starred in Antonioni's great existential-angst cycle L'avventura, La Notte, L'eclissi, and Deserto Rosso in the 1960s, boosted her range and acclaim in popular lighter, broader, bawdier and funnier fare by another cinema great, Mario Monicelli, and played opposite with comic great Sordi in several hits.

Among the first to pay tribute to the screen legend was comic actor and director Carlo Verdone who said: "She was an immense actress, complete, with a strong and incisive character. I will always remember her as being the first actress to encourage me and to applaud me at a private showing at Sergio Leone's house of Bianco Rosso e Verdone (his first hit). "Young actresses would do well to study her performances well, they will be illuminated. "Along with Anna Magnani she will be remembered as an extraordinary actress both in dramatic and comic roles. She had a splendid and admirable man beside her in Roberto Russo".

Premier Mario Draghi said she was "an actress of great irony and extraordinary talent, she conquered generations of Italians with her wit, ability, and beauty. She boosted the image of Italian cinema around the world."

Culture Minister Dario Franceschini said "Farewell Monica Vitti, farewell to the queen of Italian cinema. Today is a really sad day, a great artist and a great Italian has passed away".

Writer and long-time former companion of late novelist Alberto Moravia, Dacia Maraini, told ANSA: "She was not only an actress closed in her profession. Monica Vitta was a true intellectual, she was interested in everything, she read, she travelled. She was very intelligent, cultured, she had an open mind. She was a dear friend".
Among the male leads Vitti played opposite were Marcello Mastroianni, Alain Delon, Richard Harris, Terence Stamp, Michael Caine, and Dirk Bogarde.
She won five David di Donatello Awards for Best Actress, seven Italian Golden Globes for Best Actress, the Career Golden Globe, and the Venice Film Festival Career Golden Lion Award.
A documentary by Fabrizio Corallo marking her birthday last November 3 featured comic actor and director Carlo Verdone saying "(Alberto) Sordi thought she was great, better than any other female lead, because of her proverbial timing, and he loved her too".
He added: "Ordinary people felt she was close to them, she had entered into everyone's hearts".
Vitti's other notable films include On My Way to the Crusades, I Met a Girl Who... (1967) with Tony Curtis, The Girl with a Pistol (1968) with Stanley Baker, The Bitch Wants Blood (1969) with Maurice Ronet, and Help Me, My Love (1969) with Sordi, Italy's most popular comic actor of his generation.
Vitti starred with Marcello Mastroianni in Ettore Scola's highly successful romantic comedy Dramma della gelosia (The Pizza Triangle, 1970).
She followed it with Nini' Tirabuscio' , la donna che invento' la mossa (1970), Le coppie (1970) with Sordi, The Pacifist (1970), La supertestimone (1971), That's How We Women Are (1971), and Orders Are Orders (1972).
Vitti was in a version of La Tosca (1973) and a comedy Teresa the Thief (1973). She made Polvere di stelle (1973), directed by Sordi, for which she won the 1974 David di Donatello award for Best Actress.
Vitti played a key part in one of the episodic vignettes in Luis Buñuel's The Phantom of Liberty (1974).
She did two films with Claudia Cardinale, The Immortal Bachelor (1975) and Blonde in Black Leather (1975).
She was in Duck in Orange Sauce (1975), Mimi' Bluette... fiore del mio giardino (1976), Basta che non si sappia in giro!..
(1977), L'altra meta' del cielo (1977), State Reasons (1978), Il cilindro (1978), Per vivere meglio, divertitevi con noi (1978), Amori miei (1978) and Tigers in Lipstick (1979) (with Ursula Andress).
Vitti's second English-language film was An Almost Perfect Affair (1979), directed by Michael Ritchie and co-starring Keith Carradine, which was set during the Cannes Film Festival.
In 2000, Vitti married Roberto Russo, with whom she had been in a relationship since 1973.
She made her last public appearance in 2002 at the Paris premiere of the stage-musical Notre-Dame de Paris.
In 2011, it was disclosed that Alzheimer's disease had "removed her from the public gaze for the last 15 years." In 2018, her husband confirmed she was still living at home with him in Rome and that he looked after her personally, with the assistance of a caregiver. (ANSA).