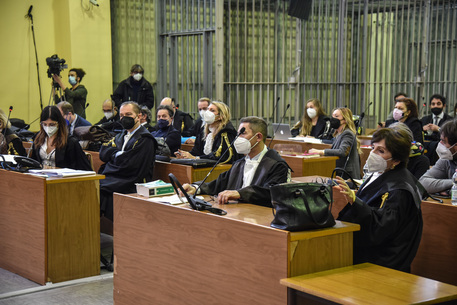 (ANSA) - ROME, JAN 19 - A Milan court on Wednesday granted a request from ex-premier Silvio Berlusconi for the so-called Ruby ter trial to be adjourned and set the next hearing for February 16.
The 85-year-old media billionaire is accused of bribing witnesses to lie about his alleged "bunga bunga" sex parties at his home and say they were innocent affairs.
The Forza Italia leader is on trial along with 28 other people, many of them women who attended the parties.
The defence team made the request on the basis of the upsurge in COVID-19 contagion, which makes it more difficult to call up witnesses, and the upcoming election of the new Italian president, with Berlusconi a possible candidate.
The case was one of several stemming from allegations Berlusconi paid for sex with teen Moroccan runaway exotic dancer nicknamed Ruby the Heartstealer when she was under 18.
He was cleared in a similar case in Siena in October.
Berlusconi was also acquitted in the original case as judges ruled he could not have known Ruby was a minor. (ANSA).