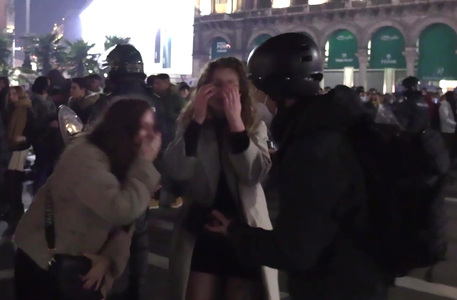 (ANSA) - ROME, JAN 10 - The alleged victims of sexual assault in Milan's Piazza Duomo on New Year's Eve have risen by four to nine, police said Monday.
Gangs of youths allegedly assaulted the young women during celebrations for the new year in the iconic Milanese square outside the city's cathedral.
Hitherto five young woman had reported a total of three alleged episodes of molestation and assault.
The case has echoes of one which occurred in Cologne in 2016.
Police have posited charges of group sexual violence because the young men who allegedly committed the assaults acted as a gang.
Police described the alleged assaults as "extremely serious".
At least three young women described the molestation and assault they suffered as "horrible", police said.
One of two 20-year-old German women allegedly molested told ANSA Friday: "We tried to push them away, my girlfriend punched them and slapped them but they just laughed and continued molesting us, I had 15 hands on me.
"The police saw us and did nothing, I don't know why, it was shocking because they can't have helped but see us." She said a video that shows them asking for help "is just the last part of an attack that lasted 10 minutes". (ANSA).