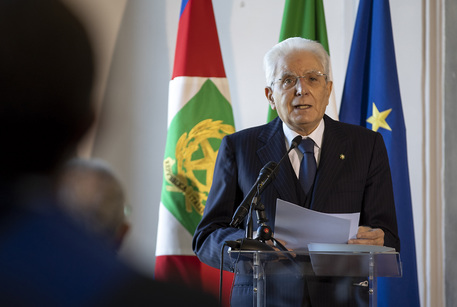 (ANSA) - ROME, NOV 25 - President Sergio Mattarella said Thursday that violence against woman was a failure for society as a whole in a message for the International Day for the Elimination of Violence Against Women.
Italy has been hit by an alarming spate of femicides in which women are murdered by their current or former partners.
According to data presented at the fifth annual event against violence against women, This Is Not Love, in Catania on Tuesday, 89 women are victims of gender violence every day in Italy, and in 62% of cases it is domestic abuse.
"Violence against women is a failure of our society was a whole, which has not managed to accept a conception of full equality in the relationship of couples in the path of liberation of women of the last century," Mattarella said.
"This violence stems from a distorted vision of the relationship between man and woman that sees the latter as an object and, in any case, a subject not worthy of full respect....
"To emerge from the spiral it is necessary to educate: educate respect, educate equality, educate the idea that force can never be an instrument of dialogue.
"This education must be given in families and schools from infancy". (ANSA).