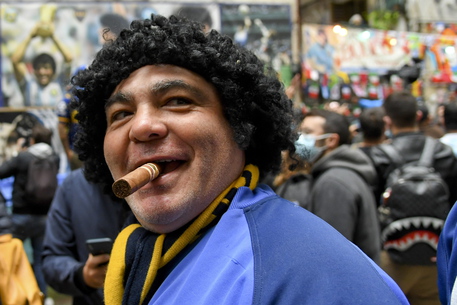 (ANSA) - ROME, NOV 25 - The heavy rain that is pouring on Naples on Thursday did not stop fans gathering outside the city's soccer ground to pay homage to Diego Maradona on the first anniversary of his death.
The city inaugurated a statue of the former Argentina and Napoli great outside the stadium, which was renamed after Maradona following his death.
The Neapolitan fans of the player were even joined by some Argentines as they sang songs devoted to him.
"Maradona is our Saint Januarius (patron saint of Naples, San San Gennaro)," said an elderly man.
"He is a son of Naples. He is always with us and he always will be".
An Argentine woman added: "Maradona couldn't fail to love Naples because Diego was like us, one of the people.
"The Neapolitans are like us Argentines. They will never be able to forget him". (ANSA).