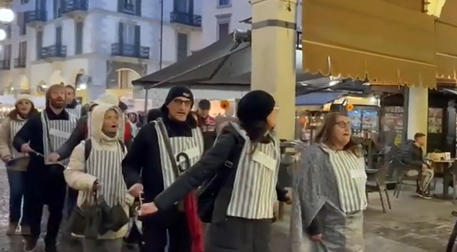 (ANSAmed) - ROME, NOV 25 - A leader of the anti-Green Pass movement in Turin on Thursday compared those who oppose the COVID-19 health certificate to Jews in a long Facebook post.
"The No Green Pass (protesters) are like the Jews persecuted by the Nazis", said Liccione after a controversial protest in the northern city of Novara.
He published the post as a caption on a photo of a Jewish family during the racial laws.
"History repeats itself, changing modality", wrote Liccione, adding a quote from the 1998 documentary The Last Days on the harrowing stories of five Hungarian Jews who endured the Holocaust and Hitler's reign of terror.
"Let's wake up before it is too late!!", added Liccione, who staged a protest on Thursday morning, saying the "Constitution isn't respected".
Protesters against the Green Pass in Novara dressed as death camp inmates, and many other Green Pass protesters have said they are being treated like the Jews under Hitler. (ANSAmed).