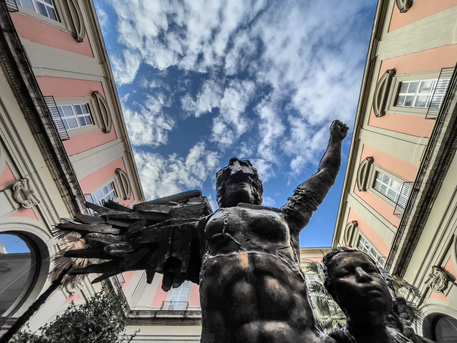 (ANSA) - ROME, NOV 24 - Naples is paying homage to Diego Maradona on the first anniversary of his death Thursday with three statues, two to be set up in the recently renamed Diego Armando Maradona football stadium and one already sitting in the city's National Archaeological Museum.
The first sculpture, the work of artist Domenico Sepe, will be installed at 13:30 Thursday in the area outside the stadium's Distinti sector, in the presence of local officials, former teamates of the 'Pibe d'Oro', and his Neapolitan son Diego Armando Maradona Junior.
Another bronze statue of the Argentine great who led Napoli to two scudetti in 1987 and 1990 will be placed in the stadium's locker room.
It was commissioned by a personal friend and former manager of the soccer legend, Stefano Ceci.
The third statue, in the garden of the archaeological museum and part of its permanent collection, is by artist Christian Leporino and is titled The Hero's Dream.
Maradona, usually rated the greatest ever football player along with Pelé, died at the age of 60 on November 25, 2020. (ANSA).