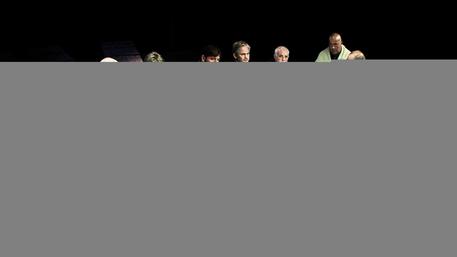 (ANSA) - ROME, NOV 23 - Three long-term convicts turned actors who appeared in the Taviani brothers' prison-set Caesar Must Die Shakespearian film drama are to get out of jail for three hours to recite Dante's Inferno at a Rome university symposium Thursday marking the 700th anniversary of the Supreme Poet's death.
Filippo, Giovanni and Francesco, serving lengthy terms for criminal association in the mafia wing of Rebibbia Prison, will be special guests at the event organized by the pontifical Dante commission.
The members of the Rebibbia Free Theatre group will tell the tales of Dante's great sinners Paolo and Francesca, Count Ugolino and Ulysses in their native Calabrian dialect.
The symposium is titled Dante Alighiero Florentine Fugitive after the poet's long exile from his native Florence.
The three men said they hoped the three hours would be long enough for them to "see the stars again" like Dante does when he emerges from the pit of Hell. (ANSA).