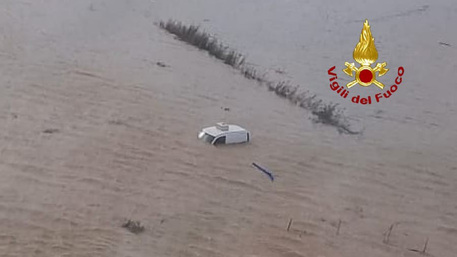 (ANSA) - ROME, OCT 25 - The body of a 67-year-old man who was caught up in flash floods on Sunday in the Sicilian town of Scordia has been found, firefighters said on Monday.
The man's 54-year wife is still missing and rescuers are searching for her.
The married couple got out of their Ford Fiesta car on Sunday when mud and floods inundated the town near Catania and they were swept away by the fury of the water, an eyewitness said.
The eyewitness was a motorist who was rescued by fire-fighters after being trapped in his car by the water and mud.
Firefighters said Monday that they had carried out 580 rescues in the previous 24 hours in Sicily and Calabria.
Sicily, Calabria, Basilicata and Puglia remained on alert on Monday in relation to the extreme weather, which caused rivers to burst their banks in the provinces of Trapani and Catania on Sunday, with torrential rain and high winds continuing to clobber the south.
Catania Mayor Salvo Pogliese has closed the city's schools, parks and cemeteries on Monday.
Antonio Sanò, the director of the iLMeteo.it weather website, said Monday that the cyclone that has hit the south has strengthened and been upgraded to a Mediterranean hurricane, with winds of over 100 km/h.
He said the wave of bad weather is set to last all week.
Scientists say climate change caused by human activity is making extreme weather events more frequent and even more intense.
(ANSA).