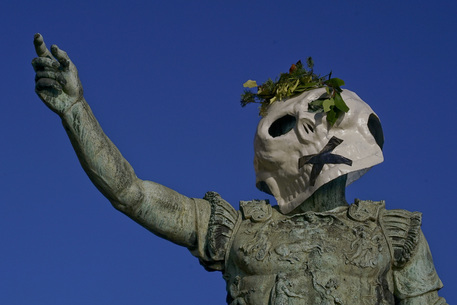 (ANSA) - ROME, OCT 22 - A mystery about papier-mache skulls that appeared on statues in cities across Italy on the night between Monday and Tuesday has been solved after the Italian branch of Extinction Rebellion owned up to the stunt.
The monuments were decorated with the skulls, covered by wreaths of branches and leaves, in Venice, Verona, Padua, Florence, Milan and Naples.
The skulls had their mouths covered in adhesive tape with a X on.
There were no reports of any of the monuments being damaged.
The Pisa section of the movement said via twitter that the skulls were part of an installation by an artist, Michele Tombolini, that Extinction Rebellion had organized.
"The skull symbolises the death of living species because of the climate collapse," the tweet read.
"The plant represents life and the salvation that is still possible, but only if we act immediately; the X appears on the mouth of the skulls because the story of the emergency is still not being told". (ANSA).