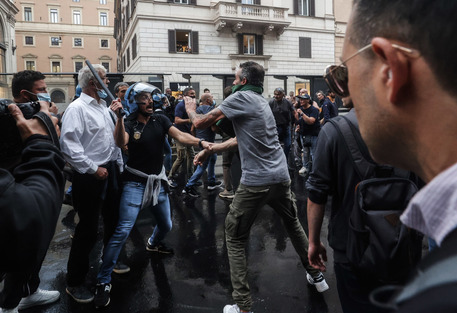 (ANSA) - ROME, OCT 11 - Rome prosecutors have opened two probes into the violence that broke out during Saturday's protest against the Green Pass vaccine passport in the capital, sources have said.
On Monday Premier Mario Draghi visited the headquarters of the CGIL trade union, which were ransacked during the rioting.
The first investigation regards six of the 12 people arrested in relation to the violence and who are suspected of being the ringleaders.
These include Forza Nuova (FN) leader Roberto Fiore, another senior member of the far-right group, Giuliano Castellino, and Luigi Aronica, a former member of the NAR right-wing terrorist group. They are suspected of instigation to commit a crime, devastation and looting.
The other probe regards the other six arrested people, who could face charges that include resisting arrest, injuring a public official and aggravated bodily harm.
The centre-left Democratic Party (PD), meanwhile, on Monday presented a motion in parliament calling on the government to dissolve Forza Nuova and other parties inspired by Fascism.
After the demonstration a group of around 30 protestors raided the emergency room of Rome's Umberto I hospital, where one of the participants had been taken.
Four people were injured, two police officers and two health workers, including a nurse who was hit with a bottle in the head, said Lazio Health Chief Alessio D'Amato.
Police have identified around 600 people who took part in the violent protests after studying video footage.
Dozens of officers were hurt.
Forza Nuova, however, remained unapologetic after the rioting.
"The popular revolution will not stop its path, with or without us, until the Green Pass if definitively withdrawn," a statement read.
"Saturday was a watershed between the old and the new.
"The people decided to raise the level of the clash".
The Green Pass, which shows that a person is vaccinated for COVID-19, has recovered from it or has tested negative in the last few days, will be obligatory for all Italian workplaces as of Friday.

Brothers of Italy (FdI) leader Giorgia Meloni said "they want to do away with FdI" after PD deputy head Peppe Provenzano accused her of "ambiguity" in saying she could not identify the "matrix" of the violence and PD chief Enrico Letta said she "cannot distance herself from neoFascist thuggery".