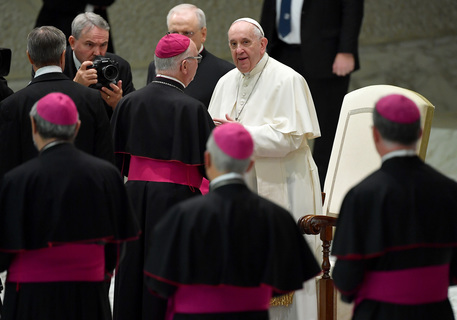 (ANSA) - ROME, OCT 6 - Pope Francis said he felt ashamed on Wednesday after an independent commission reported that huge levels of child sexual abuse had been perpetrated over decades by members of the French Catholic Church.
The report said that an estimated 330,000 people in France had been the victims of sexual abuse within Church as children over a period of 70 years and that between 2,900 and 3,200 priests and religious committed these crimes.
"I want to express my sadness to the victims, my pain at the trauma they suffered and also my shame, our shame," the Argentine pontiff said during his weekly general audience at the Paul VI hall inside the Vatican.
He said he was ashamed of the "incapacity of the church to put (this issue) at the centre of its concern for too long". (ANSA).