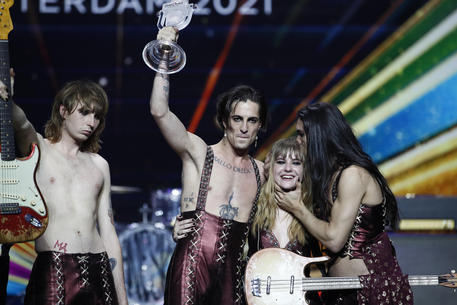 (ANSA) - ROME, SEP 27 - Eurovision Song Contest winners Måneskin will tour Europe next February and March, organisers said Monday.
The Rome band that scored a huge hit with Euro winner Zitti Ma Buoni announced their "LOUD KIDS ON TOUR concerts in major cities across Europe.
The rock outfit that currently boasts over 3.4 million streaming hits on all digital platforms and more than 43 million monthly Spotify listeners set out from the O2 Academy Brixton in London on February6 and go on to the Forest National in Brussels on Feb 10, the Rockhal at Esch-sur-Alzette in Luxembourg on Feb 12, Warswa's Torwar Hall on Feb 15, Vienna's Stadthalle on Feb 18, Le Zenith in Paris on Feb 21, Halle 622 in Zurich on Feb 24, Berlin's Verti Music Hall on Feb 26, the Mala Sportovni Hala in Prague on Feb 28, Budapests's Barba Negra on March 1, the AFAS Live in Amsterdam on March 3, the Stereo Plaza in Kiev on March 7, Moscow's Stadium Live on March 9, the Tinkoff Arena in St Petersburg on March 11, the Saku Suurhall in Tallinn on March 13 and the Arenia Riga in Riga on March 14.
The foursome of Victoria, Damiano, Thomas and Ethan also have a 13-date sold-out first Italy tour coming up this winter while they will play the Circus Maximus in Rome on July 9, 2022 before touring Europe's major festivals again. (ANSA).