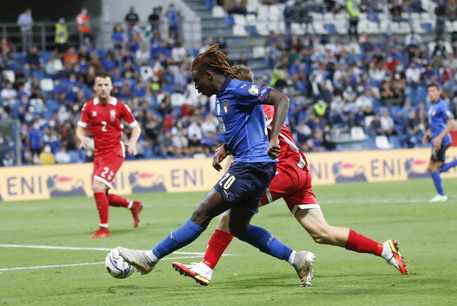 (ANSA) - ROME, SEP 9 - Coach Roberto Mancini praised the young team he fielded against Lithuania on Wednesday after a 5-0 rout in Reggio Emilia put the Azzurri's World Cup qualifying campaign back on track following draws with Switzerland and Bulgaria.
Moise Kean grabbed a brace and Giacomo Raspadori scored on his international debut - both players were born in 2000. Giovanni Di Lorenzo was also on target and the European champions' other score was an Edgaras Utkus own-goal provoked by a powerful shot by Raspadori.
The win enabled Mancini's men to extend their record unbeaten run to 37 games and go six points clear at the top of European World Cup qualifying Group C with 14 points from six games after second-placed Switzerland drew in Northern Ireland .
They will be sure to qualify for the World Cup as group winners if they win their two remaining games.
But, given Italy's good goal difference, a draw will probably be enough in November's showdown in Rome with Switzerland, who have two games in hand, as long as they win their final match in Northern Ireland.
"Despite the absences of several players (due to injury), the young players responded well," Mancini said.
"The opposition didn't offer much but scoring five or six goals is never easy. "Switzerland's draw shows that you can always slip up, but the important thing is to stay calm and collected.
"This way we won't have any problems.
"Raspadori is a ready (for this level).
"He has been with us since the European Championship. He has quality, he's young and he needs to gain experience.
"The same goes for Kean, it's all in their heads and their feet.
"If they do what they know how to, they have a great future, but it's all up to them" (ANSA).