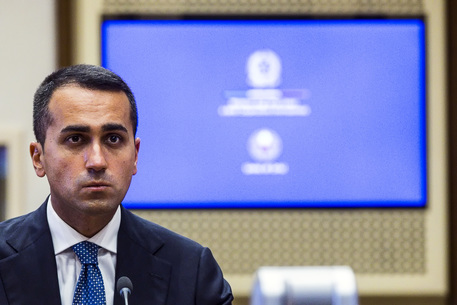 (ANSA) - ROME, AUG 31 - Italian anti-vaxxers posted death threats against Foreign Minister and 5-Star Movement (M5S) bigwig Luigi Di Maio in Telegram chat rooms on Tuesday.
"Another rat to be executed", "we need lead", and "you must die", were some of the messages.
Di Maio is among those who have become the target of anti-vax hate after statements in favour of Italy's vaccine rollout.
He said this week "the whole political spectrum, and more, must condemn the violence we are seeing on the part of the so-called No Vax, who are protesting in unacceptable forms.
"I appeal to all political forces too: you must not fuel the flames".
Rightwing leaders like the League's Matteo Salvini have said that while they condemn violence, they understand the anti-vaxxers' anger and no one should be forced to get the COVID jab.
There have been a number of violent protests and other incidents involving anti-vaxxers in Italy recently.
On Sunday night a top virologist, Matteo Bassetti, was accosted by a 46-year-old man who has been cited for issuing serious threats.
The man reportedly came across Bassetti in the street and started following him, filming him on his phone and shouting at him: "You're going to kill all of us with these vaccines and we're going to make you pay".
Bassetti, an expert in infectious diseases at Genoa's San Martino Hospital, appears regularly on Italian TV and urges people to get the COVID jab.
Meanwhile in Rome, a video journalist from La Repubblica daily was attacked by a protester at an anti-Green Pass sit-in outside the Education Ministry.
There have been several protests against the vaccine passport, which will become obligatory for domestic air and long-distance rail travel, as well as schools, on Wednesday.
Bassetti told ANSA: "I ask for the State's protection vis a vis people who threaten, I should like the State to punish these people. "I don't want escorts, I want the State to punish people who threaten. "I've been threatened since December, since the vaccine came out: first anonymous letters, then threats by phone in the clinic and at my wife's hotel, it's been continuous". The interior ministry said the right to protest was guaranteed in Italy, but not that to make threats.
Trade unions came out against the anti-Green Pass protest movement Tuesday by saying they were firmly against trains being blocked by anti-vax passengers who did not have the passport on them.
"The risks inherent in such a protest are evident and measures must be taken to protect users and staff," said the unions, Filt-Cgil, Fit-Cisl and Uiltrasporti. "Freedom of transport is a Constitutional right and those blocking it in the name of the supposed right not to be vaccinated should be punished by the law". They said "we hope there will be a rethink about these protests".
There are set to be a rash of demonstrations against the Green Pass in 54 Italian cities Wednesday. Social media have been inundated with the slogan "Enough dictatorships". Another popular post was "if they don't let us leave without the slavery passport the no one is leaving". The Green Pass is already compulsory for gyms, swimming pools, cinemas, restaurants and other indoor venues. (ANSA).