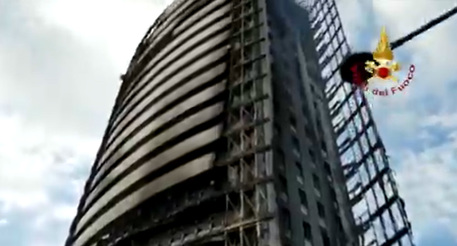 (ANSA) - MILAN, AUG 30 - A Milan skyscraper that burned out Sunday had become a 'torch' due to a 'chimney effect', experts said on Monday.
The 'Torre dei Moro' in Via Antonini became a blackened ruin after a fire that consumed it all day Sunday. No one was hurt as the building was evacuated in time.
The fire started on the 15th floor, perhaps due to a short circuit, the experts said.
It then spread to the rest of the building due to a chimney effect in which a current of air raced down between the building and its cladding panels, turning the tower into a torch, they said.
The last flames were still being put out on Monday morning.
MIlan Mayor Giuseppe Sala called for a probe to establish responsibility for the blaze.
The northern city's fire brigade chief, Giuliano Santagata, said "I've never seen anything like it in Milan before".
One of the evacuated residents said "we are 70 families without a home and we'll have to start again from scratch".
Officials said it was lucky no one had been killed. (ANSA).