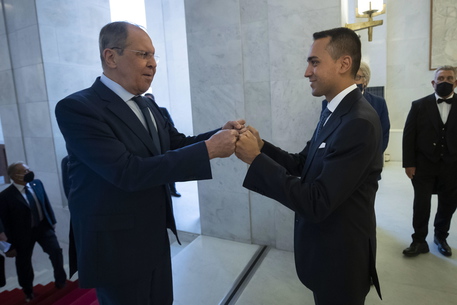 (ANSA) - ROME, AUG 27 - Foreign Minister Luigi Di Maio said after talks with Russian counterpart Sergey Lavrov in Rome Friday that Rome is counting on Moscow for the special G20 summit it plans to call on Afghanistan.
Di Maio said Italy is counting on Russia's collaboration for the planned ad hoc meeting, where Rome hopes to involve other major players like China, India and Turkey.
"Close international coordination with Russia is essential," Di Maio told a press conference with the Russian FM.
He said that Moscow was a "fundamental actor" on the global scene.
Di Maio reiterated Italy's concern over Russian opposition leader Alexei Navalny saying his basic rights must be respected.
The Italian FM also raised the question of the Ukraine crisis.
He said friendly countries had to speak to each other with frankness.
Lavrov called for an easing of visa requirements between Russia and Italy.
Lavrov earlier met Premier Mario Draghi for talks that focused on the role of the G20, which Italy is currently chairing, in the Afghan crisis.
"The priority is stabilisation" of the country and the region, the two officials agreed.
Draghi and Lavrov also reiterated the need for political dialogue in Libya. (ANSA).